Supporters of jailed opposition leader Alexey Navalny are preparing to protest in dozens of Russian cities Saturday against his imprisonment, defying official threats of a harsh crackdown.

Navalny’s backers are calling for demonstrations in at least 66 cities across the world’s largest country starting at 2 p.m. local time, including in central Moscow. The Prosecutor-General’s Office said on state TV that those involved in the unauthorized protests may be charged with “mass disorder,” while Moscow Mayor Sergei Sobyanin said police “will ensure necessary order.”

Barriers were erected to close off Moscow’s central Pushkin Square, where the opposition protest is due to take place. City workers appeared early Saturday and began to carry out repair work on pedestrian streets around the square, the Proekt news site reported.

Despite freezing temperatures, more than 15,000 joined protests in cities across Russia’s Far East and Siberia, the Meduza news site reported. At least 174 people have been detained by police, according to the OVD-Info monitoring group. Clashes between police and demonstrators took place in Vladivostok, the VL.ru news site reported.

Police in Moscow and other cities detained key allies of Navalny on Thursday and Friday in an attempt to deter the protests. Some, including his press secretary Kira Yarmysh, were held in jail to prevent them taking part. Navalny’s wife, Yulia, said Friday that she’ll attend the Moscow rally.

The showdown follows Navalny’s imprisonment on Sunday after he returned to Moscow from Berlin, where he’d been recovering from a near-fatal nerve-agent poisoning that he and Western governments blamed on President Vladimir Putin’s security service. The Kremlin denies responsibility.

Navalny, 44, has continued to challenge the authorities from prison, drawing nearly 66 million views on YouTube since Tuesday for a new video investigation into a giant Black Sea palace that he alleges belongs to Putin. The Kremlin has rejected the allegations. 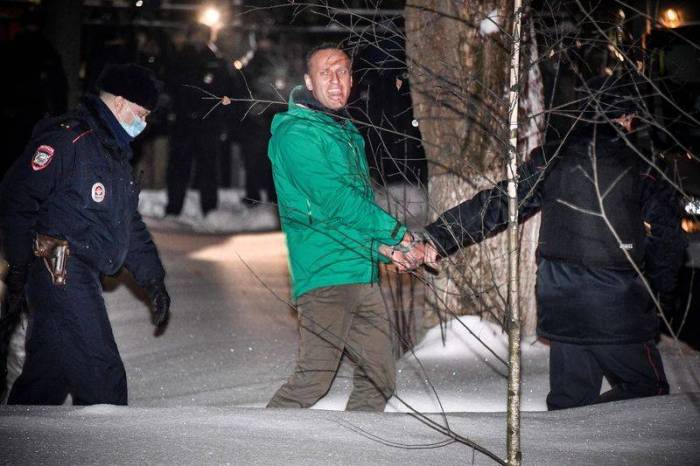 He faces a prison term of up to 3 1/2 years at a Feb. 2 hearing for allegedly violating his probation under a suspended sentence during his treatment in Germany, while potential new charges also carry a maximum 10 years in jail. Officials close to the leadership warn that the Kremlin is determined to lock up Putin’s most prominent opponent for years despite U.S. and European demands to free him.

European Council President Charles Michel called for Navalny’s release in a call with Putin Friday. New U.S. President Joe Biden’s nominee for secretary of state, Antony Blinken, told senators this week that Navalny was a voice for “millions of Russians and their voice needs to be heard.”

In a message posted Friday on his Instagram feed, Navalny said “just in case” that he has no plans to commit suicide or to have “a sudden heart attack” while in Moscow’s notorious Matrosskaya Tishina prison. “I walk very carefully on the stairs,” he said. “My psycho-emotional state is completely stable.”

Putin, 68, pushed to change the constitution last year to allow him to continue as president until 2036, though he has yet to say if he will run for a fifth term in 2024. His support fell last year to a record low as the economy buckled under the strain of the Covid-19 epidemic.

With Russia due to hold parliamentary elections in September, Navalny is seeking to convert public unhappiness into increased opposition to Putin’s rule.