Shusha – The Spiritual, Musical and Artistic Genesis of Azerbaijan Shusha is a dear homeland to Karabakh Azerbaijanis, and it means the world to all Azerbaijanis.

Despite the pain of defeat during the years of the Armenian occupation, Shusha’s ancestral spirit took refuge in the hearts of every Azerbaijani dreaming for a long-awaited reunion with Shusha, a unique city and a phenomenon in its own right.

Situated on a heavenly, picturesque plateau in the Karabakh mountains, Shusha is also a colourful plateau for Azerbaijani talent in tangible and non-tangible culture, the creative arts and science and for those who have contributed tremendously to the collective identity of Azerbaijanis.

It is the Jerusalem of Azerbaijan: a cradle of Azerbaijani culture. A creative and scholarly hub and host to artistic and literary majlis (society/debating forums). A truly holy place for Azerbaijani musical heritage referred to by historians and travellers as the ‘Conservatoire of the Caucasus’, a music academy of the Orient.

Shusha is home to the unique Azerbaijani musical tradition of Mugham, which UNESCO proclaimed a ‘Masterpiece of the Oral and Intangible Heritage of Humanity’ and was added to the UNESCO Intangible Cultural Heritage Lists in 2008.

It is the birthplace of the founder of Azerbaijani classical music, Uzeyir Hajibeyov, who revolutionised the classic opera of the European tradition by synthesising it with the Azerbaijani Mugham and creating his own genre of the Eastern opera that had tremendous success and took the Caucasus, Russia, Europe and beyond by storm. Hajibeyov’s opera masterpieces ‘Leyli and Majnun’, ‘Koroghlu’, ‘Arshin Mal Alan’ and ‘O Olmasin Bu Olsun’ are more like a musical alphabet to Azerbaijanis, and they have been very well received by international audiences today. A staple idiom by the great Russian poet Sergey Yesenin, “If you can’t sing, you’re not from Shusha” gives a clear idea of how Shusha was perceived, and not only by Azerbaijanis.

It is no wonder there were so many house-museums in Shusha for the great historical figures of Azerbaijani culture and pioneers of new genres and movements. It was therefore unimaginably painful to find such historical monuments defiled, demolished and destroyed by the Armenian settlers.

Shusha is the birthplace of Khurshid Banu Natavan, a woman of will and power celebrated today as a rare example of early female empowerment in Azerbaijan. Natavan, the daughter of the last Karabakh khan, Mehdi Gulu Khan, was a talented poetess, artist and philanthropist, promoting the social and cultural development of Karabakh. She was the founder of the popular Majlisi-uns (Society of Friends), a literary majlis for intellectuals to engage and interact. The model of such majlis had increasingly become popular, and a number of smaller majlises have sprung up over time in Karabakh and other regions of Azerbaijan. 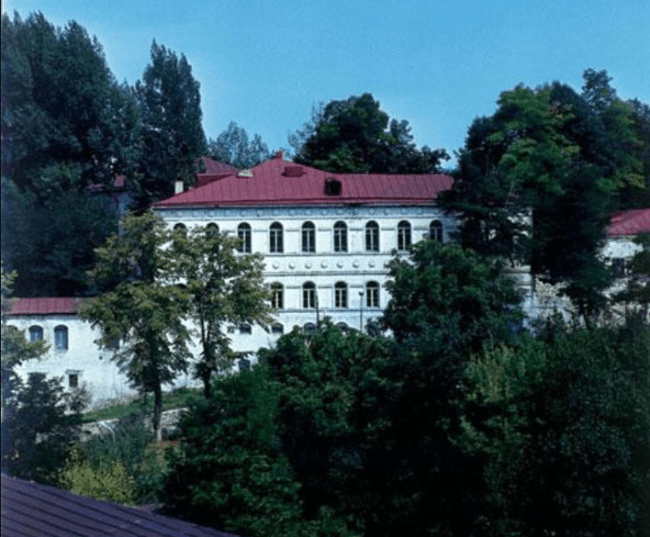 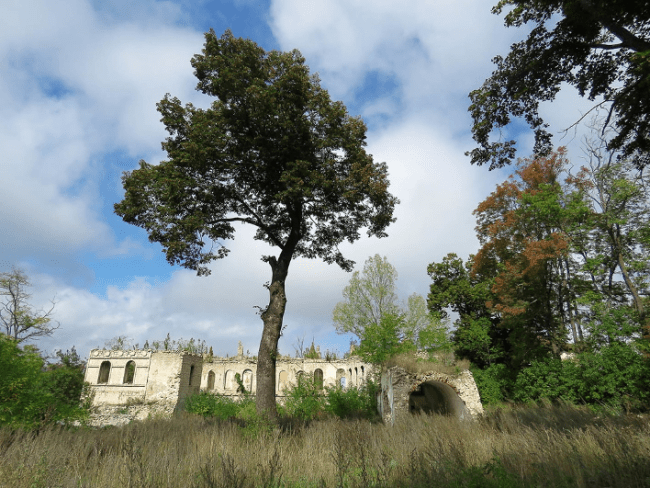 Shusha is what defines the Azerbaijani cultural DNA. The national suffering and trauma of a ruthless uprooting of this special bond with Shusha has only reinforced the sense of belonging and our desire to seek historical justice.

The liberated Shusha of today does not look the way it does in the memory of Azerbaijanis. Over the decades of Armenian occupation, Shusha became the subject of cultural genocide by the Armenian settlers driven by one motive – to erase the historical heritage of Azerbaijanis by all means.

It is time to restore and rebuild Shusha, and the memory of old Shusha is relevant as never before.

Let’s take a walk through the city of Shusha – the one that Azerbaijanis keep in their memory and hearts.

The Shusha Fortress is a protective wall for which we can thank the very founder of the Karabakh Khanate, Panah Ali Khan (Panah Ali Bey Sarijali Javanshir). The main construction of the fortress was supervised by the first vizier of the Karabakh Khanate, Molla Panah Vagif, an intellectual and astronomer with great skills in applied mathematics, who was also the greatest poet of Azerbaijan.

The fortress, which is 2.5 kilometres in length, is made from limestone and contains four gates: Ganja, Agoglan/Shushakend, Irivan and Khalifali. The main northern Ganja Gapisi, i.e., the Ganja Gate, was the main gate linking Shusha with Ganja. Up to this day, it remains the first visual impression of the city of Shusha and has been captured in many paintings, postcards, films and documentaries. To Azerbaijanis, deprived of their sacred cultural cradle on 8 May 1992 as a result of the Armenian occupation, the Ganja Gate, its deep lancet arch framed by a mosaic of dark and light colours, carries a deep emotional attachment, and it is no coincidence that the most sought-after image in the Karabakh liberation war of 2020 was the Azerbaijani national flag flying from the Ganja Gapisi, bringing tears of joy to every Azerbaijani. 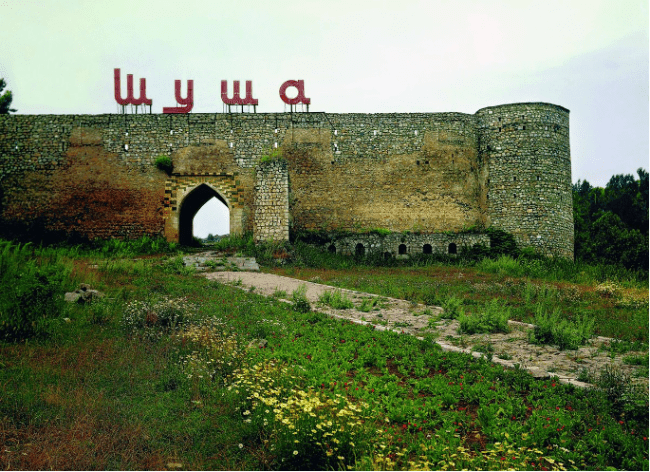 Shusha, just like the other cities of Azerbaijan, was divided into mehelles that differed in size and configuration as a result of the unique topographical relief of Shusha itself. Every mehelle was made up of families, craftsmen or communities of tradesmen and included a public square, mosque, school, mekteb or medrese, bathhouse and shopping bazaar.

Shusha’s palace houses, also called imarets or malikane, belonging to the Azerbaijani nobility, bohemia and other higher tiers of society, retain a lavish air and offer a glorious glimpse of our past.

Imarets were built from thick, white stone extracted by local masons from the rocks surrounding the city. The houses had mostly two or three floors with beautiful high and illuminated windows and big entrances. Skilful mural painters decorated the walls with flowers or battle and hunting scenes. The windows were filled with colourful shebeke – a unique, traditional stained-glass handicraft in which window sashes and lattices were made from standard wooden components with wooden pins and not a single nail. The many stained-glass panels created a pattern of 10–12 radial stars with rays.

We can find a descriptive account of Shusha’s architecture and lifestyle in the memoirs of the Russian painter Vereshagin, who visited Shusha in 1865, and the German traveller Baron von Hatzhausen, who visited in 1843, both of whom found a fascinating mixture of Eastern and European customs and traditions.

Haji Gulu’s estate in Khoja Marjanli area was built in 1851.

There were 46 rooms and two large halls in the three-storey palace built in the national style. 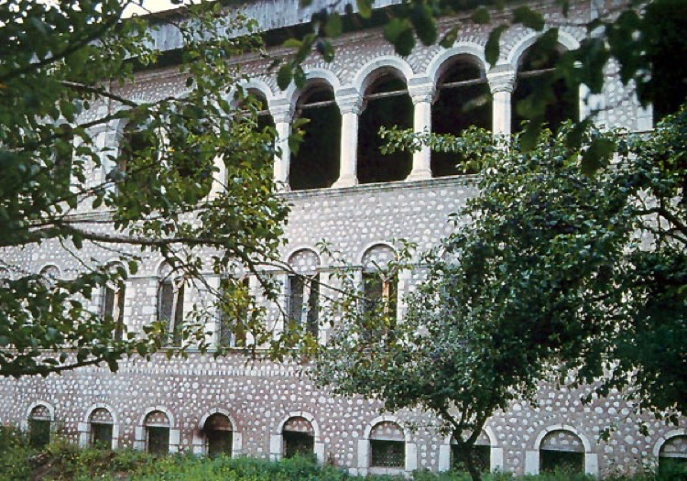 The Estate Before the Armenian Occupation 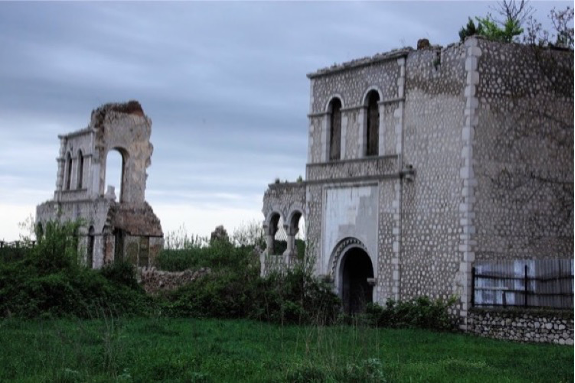 The estate was demolished by the artillery fire in 1992 by Armenian Armed Forces. 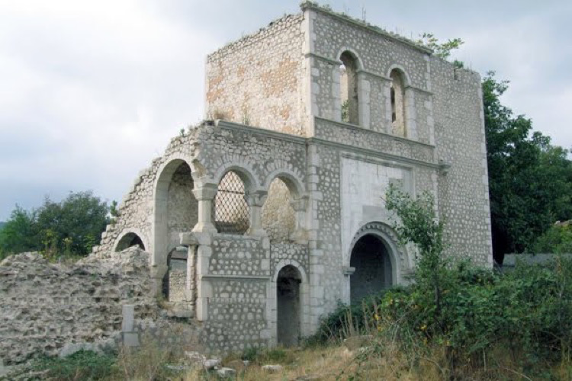 The greatest Azerbaijani composer Uzeyir Hacibeyov’s House-Museum, founded in 1959, functioned until the occupation of Shusha by Armenian Armed Forces in 1992. 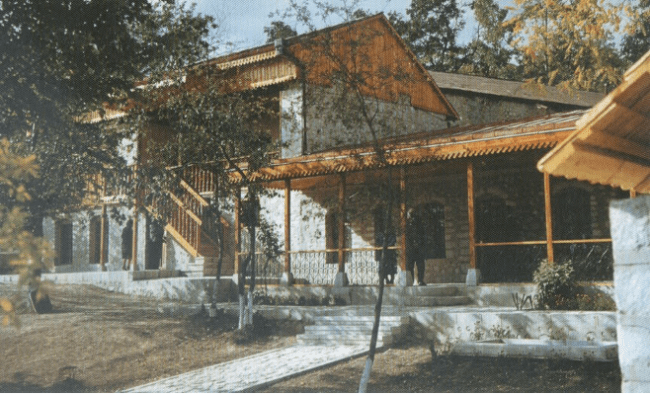 House-Museum of Uzeyir Hajibeyov before the Armenian Occupation 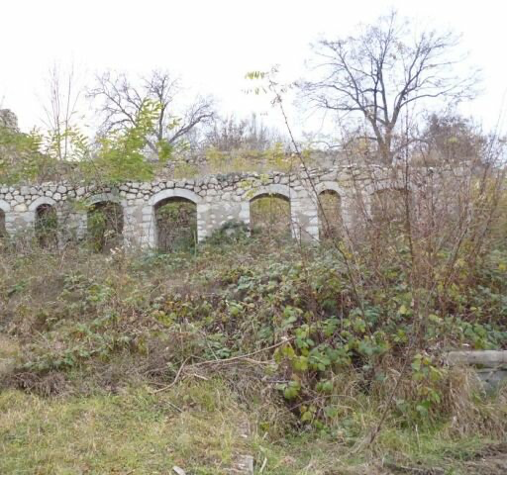 House-Museum of Uzeyir Hajibeyov during the Armenian Occupation 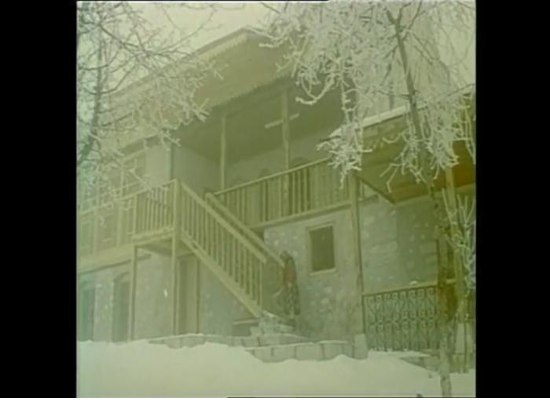 House-Museum of Khan Shushinky before the Armenian Occupation 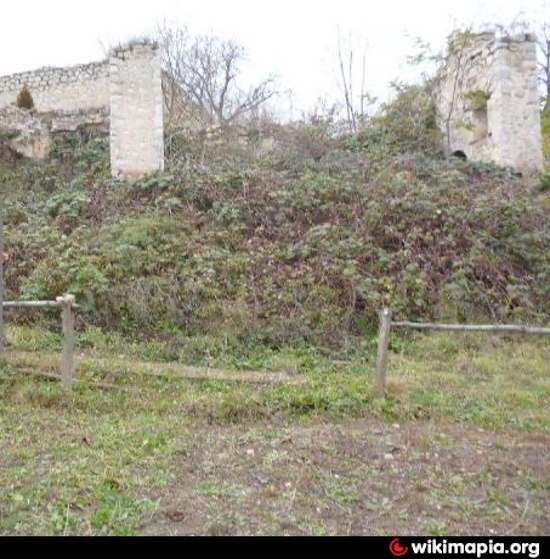 House-museum of Khan Shushinsky After the Armenian Occupation 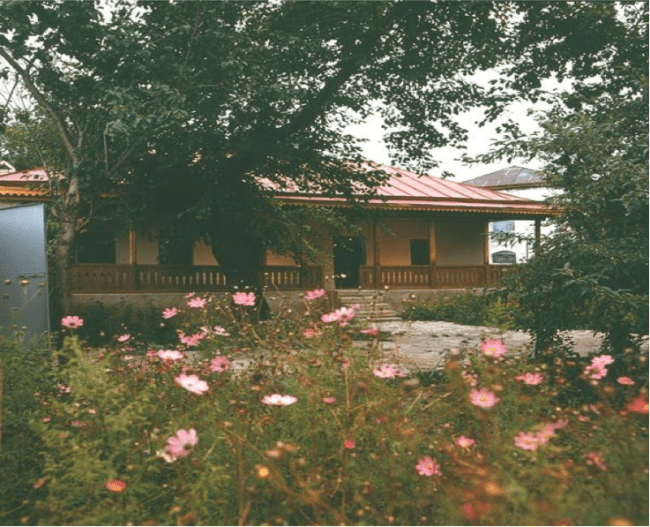 House-Museum of the Azerbaijani singer Bulbul before the Armenian Occupation 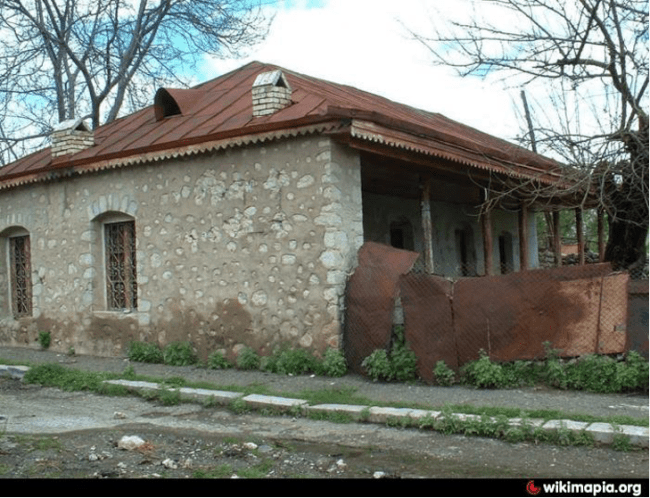 House-Museum of the Azerbaijani singer Bulbul after the Armenian Occupation 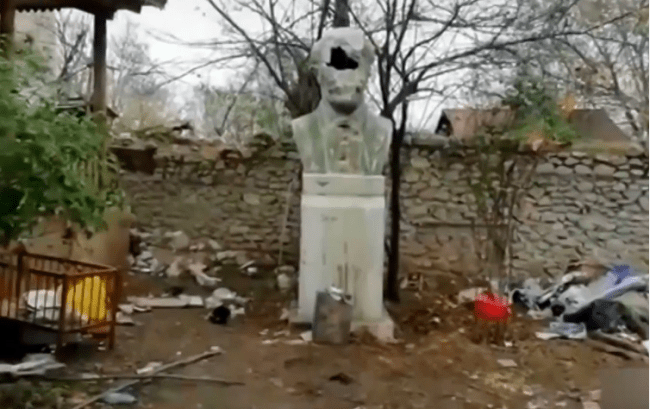 The Yukhari Govhar Agha, also named Boyuk Cuma, mosque belongs to the upper part of Shusha and was built in the main square, whilst the Ashaghi Govhar Agha is in the lower part of the town. Both are symbolic for Shusha and great showcases of historical architecture.

The construction of the main Yukhari mosque, initiated by Ibrahim Khalil Khan in 1768, was renovated and completed in 1883–1885, after a long pause, by architect Karbalayi Safikhan Karabakhi and by Govhar Agha, a daughter of Ibrahim Khalil Khan. This was the same Govhar Agha who built the Ashaghi mosque.

In the Soviet period, the Yukhari mosque served as a museum, only to regain its properly functioning status in 1988. However, it accommodated the congregation for only a short time owing to the fall of Shusha to Armenia in 1992 when the mosque was closed, severely damaged and neglected for decades. From the 2010s, the Armenian separatists renovated and turned it into a ‘Persian’ mosque with help of Iranian funding, and operated as an Iranian cultural centre. Following the great Shusha liberation battle on 8 November 2020 by Azerbaijani forces, the first Friday prayer in 28 years was held in the mosque on 13 November 2020. 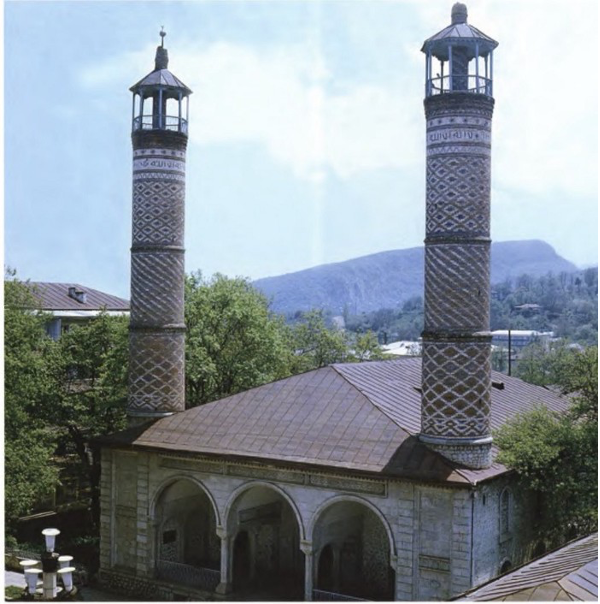 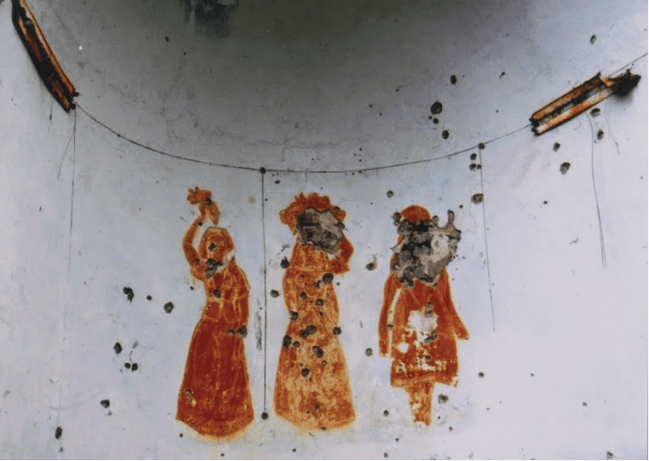 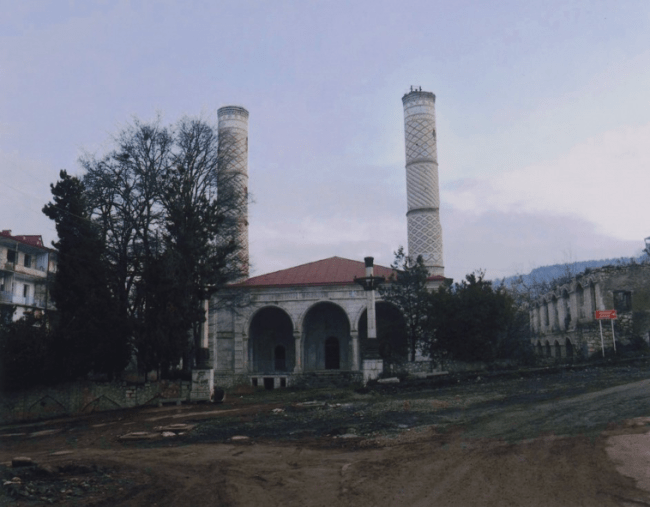 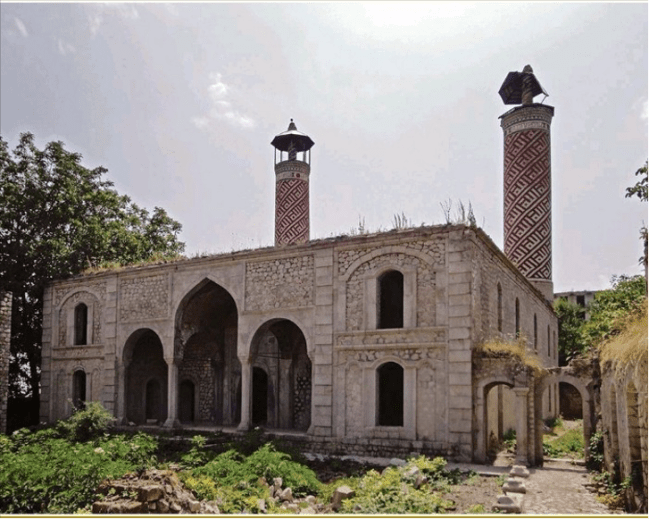 Ashaghi Govhar Agha Mosque after its destruction by Armenian forces. 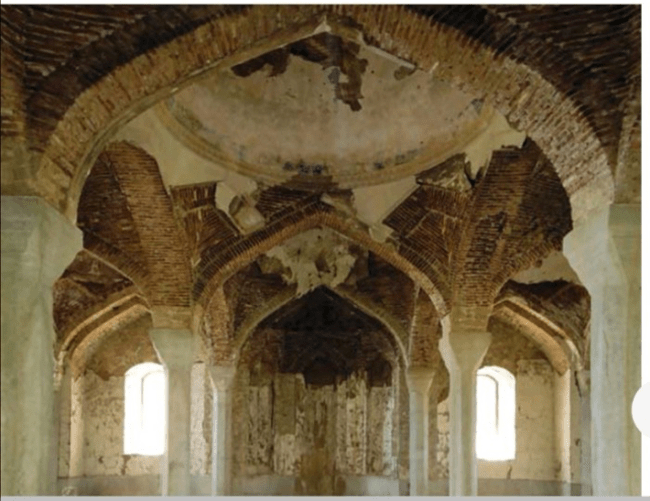 Built in 1883 by the outstanding Shusha architect Safi Khan Garabaghli, following plans laid down in 1759 by Panah Ali Khan, the Saatli mosque was famous for its well-decorated, tall minaret with isolated entrance, its asymmetric main entrance and refined interior design involving moulding, stained-glass shebeke ornaments and woodcarvings. Molla Panah Vagif used to teach in the medrese of this mosque. 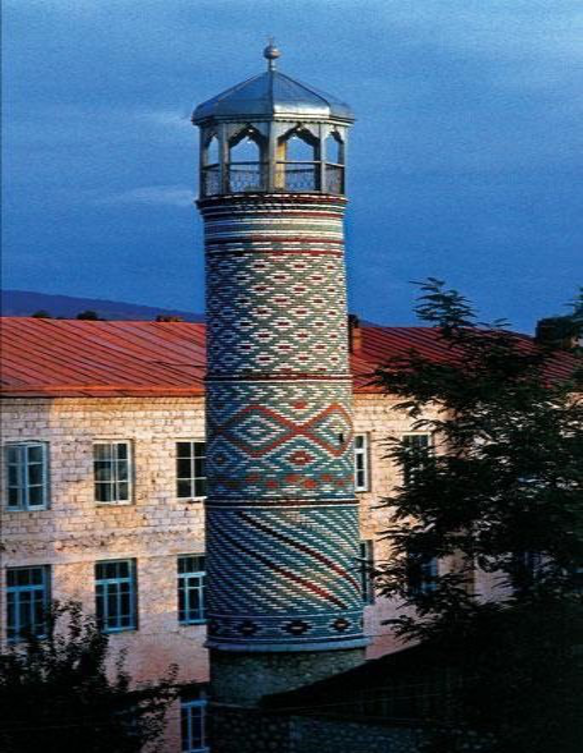 Saatli Mosque before the Armenian Occupation 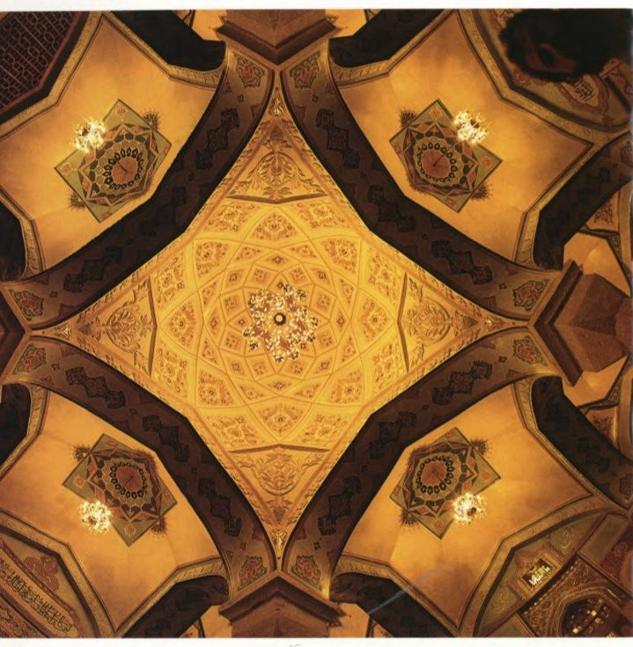 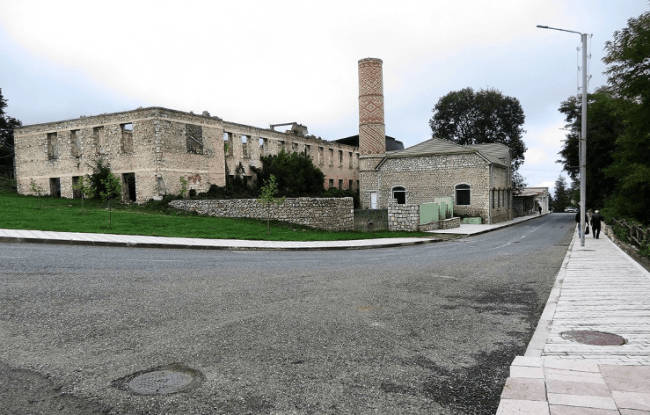 Caravanserais are an inseparable part of all Azerbaijani cities, being places for travellers and pilgrims and merchants with caravans to stay. This caravanserai was used as a trading centre during the Soviet period. 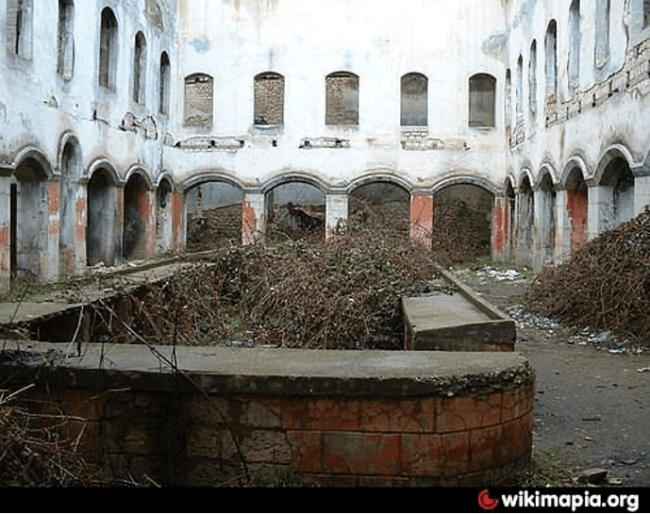 aravanserai after the Armenian occupation 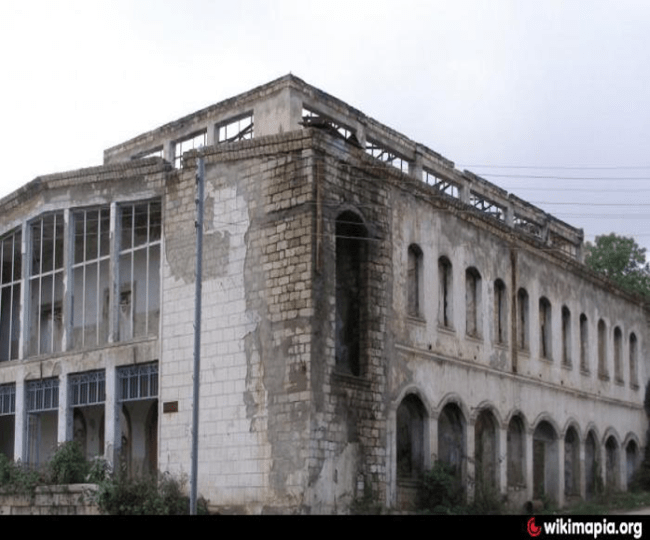 Heartbroken by the devastating cultural destruction of the Azerbaijani heritage of Shusha, together with the whole of the Karabakh region, Azerbaijanis now face a new era of rehabilitation and restoration of the newly-liberated Karabakh and its regions from the ashes which have been left.

The bronze statues of poetess Natavan, singer Bulbul and composer Hajibeyov were severely damaged and dismantled by the Armenian occupying forces in 1992. They were saved by being transferred from Shusha to Baku and, after nearly 30 years of exile, returned in January 2021 to symbolise the return to Shusha and to the whole of Karabakh for the estimated one million exiled, suffering and homesick internally displaced persons and refugees of Azerbaijan.