Together with the staff of the British Embassy, we honour the memory of the martyrs of January 20 tragedy, a symbol of Azerbaijan's independence, said British Ambassador to Azerbaijan James Sharp in his tweet. 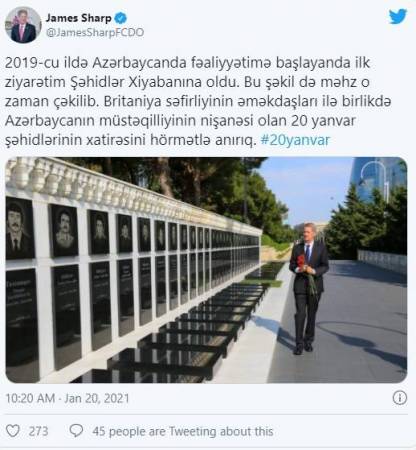 "When I started working in Azerbaijan in 2019, my first visit was to the Alley of Martyrs. This photo was taken at that time", he added.

Note, on January 20, 1990, the Soviet army forces entered Baku to suppress the masses protesting the USSR-supported Armenian aggression based on territorial claims against Azerbaijan.

The result was an unprecedented tragedy for Azerbaijan. Valiant sons and daughters of Azerbaijan put the country’s freedom, honour and dignity above everything else, sacrificed their lives and became martyrs.

On the night of January 19-20, 1990, 147 people were killed, 744 were injured and 841 were illegally arrested after Soviet troops entered Baku. The Soviet troops also destroyed 200 apartments and houses, as well as private and public property.