Larry King, the American broadcaster and cable news interviewer of celebrities and public figures, has died. He was 87 and had been hospitalized at Cedars-Sinai medical center in Los Angeles with symptoms of the coronavirus.

A statement on King’s social media accounts confirmed the news on Saturday.

“For 63 years,” it said, “and across the platforms of radio, television and digital media, Larry’s many thousands of interviews, awards and global acclaim stand as a testament to his unique and lasting talent as a broadcaster.”

King hosted his flagship CNN show, Larry King Live, for 25 years. At its height, it drew 1.5 million viewers a night.

“We mourn the passing of our colleague Larry King,” said CNN president Jeff Zucker in a statement posted to Twitter. “The scrappy young man from Brooklyn had a history-making career spanning radio and television. His curiosity about the world propelled his award-winning career in broadcasting, but it was his generosity of spirit that drew the world to him.

“We are so proud of the 25 years he spent with CNN, where his newsmaker interviews truly put the network on the international stage. From our CNN family to Larry’s, we send our thoughts and prayers, and a promise to carry on his curiosity for the world in our work.”

With his trademark suspenders, gravelly New York accent and under-prepared questioning – he often said he preferred entering an interview knowing no more than his audience, so he could ask the questions they would – over the course of six decades King became one of America’s most recognizable media figures.

“While it was his name appearing in the show’s titles,” the statement announcing his death said, “Larry always viewed his interview subjects as the true stars of his programs and himself as merely an unbiased conduit between the guest and audience. Whether he was interviewing a US president, foreign leader, celebrity, scandal-ridden personage or an everyman, Larry liked to ask short direct and uncomplicated questions.”

Known for his soft interview style – “If you approach [an interview] combatively you get defensiveness and you don’t learn much,” he told the Guardian in 2015 – he conducted more than 30,000 interviews during his career, according to CNN, including such public figures as Yasser Arafat, Nelson Mandela and Vladimir Putin, every president from Richard Nixon to his friend Donald Trump, and celebrities from Frank Sinatra to Lady Gaga.

Born Lawrence Harvey Zeiger on 19 November 1933 in Brooklyn to Orthodox Jewish immigrant parents – his father Aaron, a restaurant owner, was from Austria and his mother Jennie, a garment worker, from Lithuania – the Peabody-winning broadcaster grew up dreaming of a career in radio. He got his break as a morning DJ in Miami Beach, Florida in 1957 and expanded to national broadcasting in 1978, cultivating a devoted audience with meandering interviews and personal digressions.

CNN gave King a primetime show in 1985, which he hosted until 2010, when he was contentiously replaced by the British TV personality Piers Morgan.

King continued to host specials for the network until 2012, when he left CNN to launch a production venture, Ora TV, with the Mexican billionaire Carlos Slim. King drew criticism in recent years for his work with RT (previously Russia Today), a Russian state broadcaster which picked up his political and talkshow programs in 2013.

King was married eight times to seven women, his final marriage, to Shawn Southwick, ending in divorce in 2019. He survived a major heart attack in 1987, lung cancer in 2017, an angioplasty and stroke in 2019, and the death of two of his five children –– son Andy, 65, from a heart attack, and daughter Chaia, 51, from lung cancer –– within five weeks in August last year.

In 2015, King told the Guardian he was most proud of being a father and his many awards, including a lifetime achievement Emmy.

“Hopefully I’ve brought enjoyment and knowledge to people by being a conduit,” he said.

Many of King’s colleagues, interviewees and fans used social media to pay tribute.

“So few TV hosts can do their jobs like Larry King,” said Greta Van Susteren, a former CNN and Fox News anchor. “You could not tell what his politics were … he let his guests answer the questions … and he thought his guests the ‘stars’ and not himself … he profiled his guests, didn’t talk about himself.

“Larry King gave me so much great advice for TV: ‘Don’t talk too much… the viewers will get sick of you … let your guests talk … they tuned in to see your guests, not to listen to you talk about yourself.” 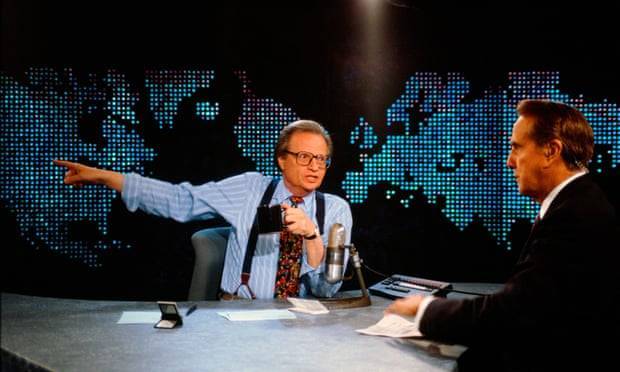 New York governor Andrew Cuomo said King “was a Brooklyn boy who become a newsman who interviewed the newsmakers. He conducted over 50,000 interviews that informed Americans in a clear and plain way. New York sends condolences to his family and many friends.”

Meghan McCain, the daughter of the late senator and presidential candidate John McCain, said in an Instagram post: “There are ‘friends’ in this industry and then there are real friends for whom I can count on one hand. Larry was one of those people.

“I am grateful for the years of friendship and all of the stories you shared. You are an institution, a broadcast legend, will never be replaced and truly missed. TV is less interesting without you. Prayers and light to the entire King family today.”

The statement announcing his death, from Ora media, contained “condolences to his surviving children Larry Jr, Chance, Cannon and the entire King family”. It said funeral arrangements and a memorial service “will be announced later in coordination with the king family who ask for their privacy at this time”.

News is under threat …

… just when we need it the most. Millions of readers around the world are flocking to the Guardian in search of honest, authoritative, fact-based reporting that can help them understand the biggest challenge we have faced in our lifetime. But at this crucial moment, news organisations are facing a cruel financial double blow: with fewer people able to leave their homes, and fewer news vendors in operation, we’re seeing a reduction in newspaper sales across the UK. Advertising revenue continues to fall steeply meanwhile as businesses feel the pinch. We need you to help fill the gap.

We believe every one of us deserves equal access to vital public service journalism. So, unlike many others, we made a different choice: to keep Guardian journalism open for all, regardless of where they live or what they can afford to pay. This would not be possible without financial contributions from those who can afford to pay, who now support our work from 180 countries around the world.

Reader financial support has meant we can keep investigating, disentangling and interrogating. It has protected our independence, which has never been so critical. We are so grateful.

We need your support so we can keep delivering quality journalism that’s open and independent. And that is here for the long term. Every reader contribution, however big or small, is so valuable. Support The Guardian from as little as $1 – and it only takes a minute. Thank you.